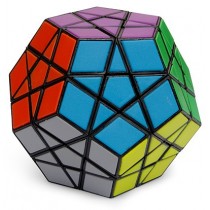 Buy Megaminx: a great variant of the rubik's cube you need in your collection

Buying Megaminx is the best thing you can do if you want to have a good time with this interesting cube. The number of pieces you can move is fifty. But don't get confused, it is considered that, compared to other cubes, it is only a little more complex to complete. Buying one is a great option.

How is the Megaminx?

Several individuals invented the Rubik's Cube variation that has this peculiar shape. Also, different companies started to manufacture and distribute it simultaneously, but with some slight differences between them. The patent rights were acquired by Uwe Méffert.

An interesting fact is that there is another version of the Megaminx called "Hungarian Supernova". The credit for his invention goes to Christoph Bandelow and this was the first to be launched on the market. The reason why this fact is not very well known is that the two versions have no noticeable variations from each other.

There are different classifications of this type of Rubik's cube. For example, the Megaminx 2x2. It should be noted that the shapes of the pieces of this dodecahedron are not the same in all the designs of this rubik. In some they are larger than in others.

In the case of the Megaminx 12 x 12, this is one of the best known types, having twelve faces. The way this rubik is solved does not vary much from the 3x3 cube, it can be said that the only variation is that the faces are pentagonal and in the cube they are square.

Although the Megaminx is not considered to be complicated to assemble, there are versions that are ideal for those who want to face real challenges. The most difficult variations are Zettaminx, Petaminx, Teraminx and Gigaminx. There is also a 15 x 15 model known as Yottaminx.

Why buy a Rubik's Megaminx cube?

In general, this rubik has a unique twist feeling and the same goes for the corner cut. If you don't want to vary the techniques you use to build the 3 x 3 rubik cube, Megaminx is a great option, why not? You don't need to change the algorithms much to be able to complete it.

Another reason for you to decide to buy Megaminx is to see the models offered by the brands that stand out in this market. The textures of their pieces, the size of the product and its design are very varied, there is something for everyone.

In addition, there are elements of this class that are made for professionals who participate in competitions. These help you save a few tenths of a second that is not bad at all in a competition. The record for completing the Megaminx is held by Juan Pablo Huanqui, both in single and average time.

Regardless of whether you participate in competition or not, the Megaminx is a great choice if you want a variation of the Rubik's Cube. At MasKeCubos you will find the dodecahedra made by the most recognized brands. Look for us and buy your Megaminx!

Megaminx There are 29 products.